A list of the data-driven analyst companies highlights the fintech startups and unicorns that have raised the most capital in the last 5 years. The Insurance sector includes 21 players. Here are the players and why Zhong An is not one of them

Since 2013, about 53 billion dollars of financing from venture capital and corporate venture capital have been raised: 250 startups, scaleups and unicorns have been listed by CB Insights in the Fintech 250 list in 2018, companies that represent the best in the development of innovative financial technology.
“The financial services industry is likely to experience more changes in the next 10 years than in the last 100. It is being driven by a group of smart and disruptive startup companies and the Fintech 250 list includes the most talented ones. These companies are going to introduce innovative technologies and new business models to financial services that will permanently change the way we manage money and run businesses. – said Anand Sanwal, CEO of CB Insights, in a press release.
44% of the companies of the “Fintech 250” 2018 edition are based outside the United States; Great Britain is the birthplace of most of the non-USA companies on the list, followed by India. Europe is growing rapidly in the global Fintech industry and some startups, N26 and Revolut, have already planned to expand in the United States, thus running up against the US Fintech. The main VC investor in the “Fintech 250” companies is Ribbit Capital, which has invested in several companies on the list including Nubank, Revolut, and PolicyBazaar (new unicorns in 2018) and companies back on the list again such as Robinhood, Wealthfront, Gusto, Coinbase, Cross River Bank, and Upgrade.
The most important funding was in Ant Financial, raising an outstanding investment of 14 billion dollars, resulting in the most funded company of “Fintech 250”, with about 19.1 billion dollars raised in 4 investment rounds.
With regard to the specific insurance sector, the report indicates that about 8 billion dollars were invested between 2012 and 2017 and that future investments will slow down with regard to early stage insurtech startups focused on distribution models, allowing stronger players to stand out and strengthen, while interest in b2b startups with back-end system technologies will grow.
The infographic below, based on the report, shows all the best insurtech 2018 startups according to CB Insights. 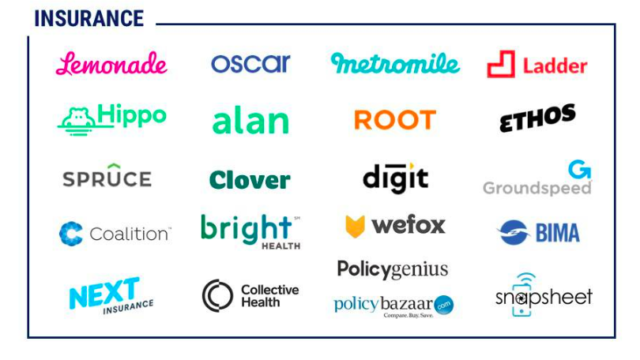 Several of these startups have been mentioned on several occasions: Bima, for example, which sells micro-policies in developing countries to those who have never had insurance before, supporting financial inclusion and access to health services for millions of people; Lemonade, the first certified Benefit Corporation insurance; Hippo, its hub allows real estate policies to be managed using big data, satellites and smart home devices; Bright Health, a personalized health policy that leverages big data; Policy Genius, online data-driven broker; Clover, data-driven startup focused on the offer for the elderly; Metromile, car insurance startup in usage-based insurance formula.
Surprisingly, Zhong An, the world’s most important insurtech startup in terms of capital received, market and growth rate, is not on the list, we have last talked about it in this article.
Of course this is not an oversight, but rather a “graduztion” of the company from the Fintech 250 list (present in 2017) to the IPO section: since September 2017 it has been listed on the Hong Kong Stock Exchange, where it has raised 1.5 billion dollars and brought its total valuation to over 11 billion dollars. As a result, it is the sixth most valuable fintech company worldwide (after PayPal, Square and Stripe).
Launched in October 2013 by Alibaba Group, Ping An Insurance Company and Tencent as the first Chinese “online only” company, Zhong An attracted a new customer segment consisting of Millennials and small traders with a portfolio of over 200 products. It’s a more technological than insurance company, just think that 52% of its 1,700 employees is in the technology sector and only 5% is in the sales sector. Thanks to this feature, allowing it to better know its customers by leveraging on big data, it has managed to rethink the insurance product, focusing in particular on micro-policies. Some of these cut out specific risks from standard policies, such as health insurance against cancer or diabetes; others are related to risks associated with e-commerce (product returns, damage, etc.); others are almost crazy compared to a traditional insurance vision, for example, during the 2014 World Cup, Zhong An offered fans “hooligan insurance” at the price of $ 0.45 to cover them for medical expenses from skirmishes with fans of opposing teams.
ZhongAn has recently released a SaaS platform for other insurance companies in China, announced its blockchain projects, and has unveiled the results of the first half of 2018, registering an increase of 5 positions compared to 2017 in the Chinese insurance industry and taking 13th place in the market. An extraordinary result considering it is a 5-year-old startup.
Click here to read the full version of the report.

Insurtech, here are two Italian companies to keep an eye on